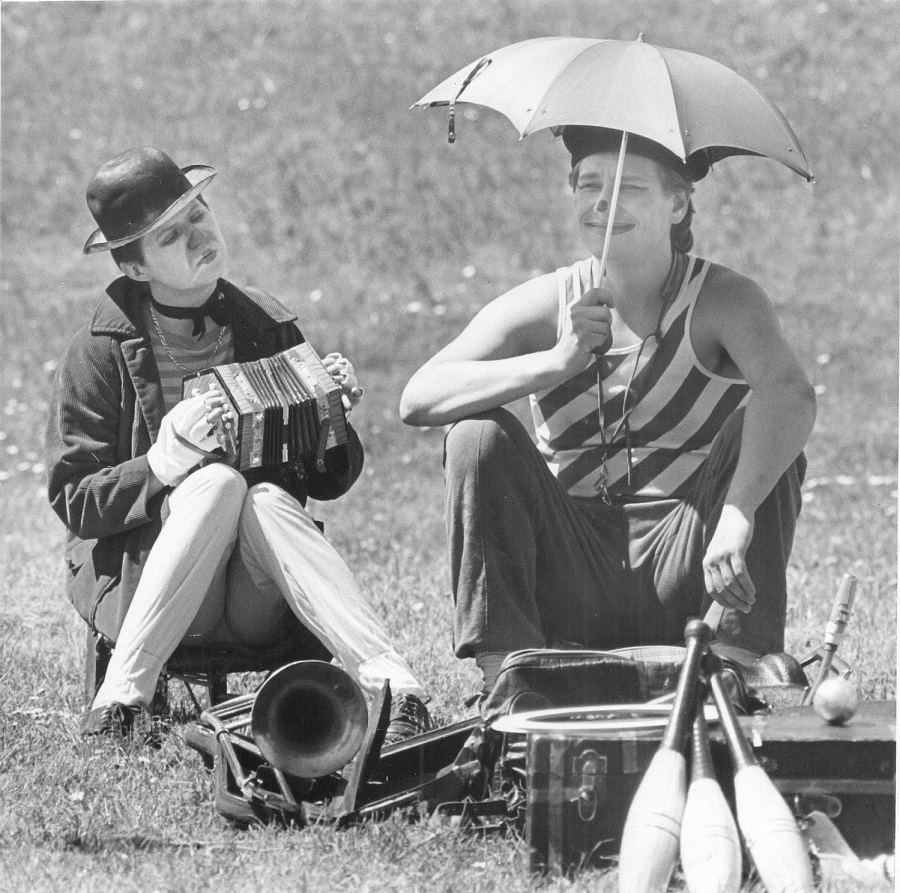 The essence of the style is revealed by the classic red ping-pong ball nose. As a mask it has the simplest of shapes; its roundness suggests innocence. Its redness implies passion. And most importantly, it leaves most of the face uncovered, revealing the individual.

In the clown we recognize the young child. We recognize the child’s appetites, pre-socialized nature, curiosity, demonstrations of power, cruelty, physicality, credulity, hubris, playfulness and unpredictability.

The Clown “plays out” to the audience, breaking the fourth wall, rather in the way a toddler “performs” for its parents.

There are three types of clowns. In the circus they are the White Clown, the Auguste and the Eccentric. Their natures tend to be respectively, intellectual, emotional and spiritual. These qualities can also be recognized in Groucho, Chicco and Harpo Marx. The White Clown, the intellectual clown, by which is meant “verbal and strategic,” tends to initiate the action, often as a way to show-off to the audience. The Auguste tends to receive the action, to react to it, and so ride an emotional roller-coaster, credulous, ever the optimist, always the flop. The Eccentric is so much not-of-this-world that the normal rules of the social and physical universes often simply don’t apply. His strangeness is his protection. The action passes over his head.

In a typical sequence the White Clown plays a trick on the First Auguste. The Auguste takes the fall, and then, to recover his dignity, has to admit that the trick was indeed brilliant, and a wonderful thing to play on someone else. Enter the Second Auguste, who is familiar with the trick and slightly more intelligent, or the Eccentric who is operating in a separate universe. In either case, the trick backfires and the First Auguste takes the fall again.

Clowning is a naďve form, like Melodrama and Commedia. The characters may try, but never succeed in learning from their mistakes. Clowns often benefit from being framed by a “normal” person. Because they are raw and unpredictable, they are more closely related to the wild animals than to the acrobats. Just as Jerry Lewis needs his Dean Martin, the clowns need their ringmaster as bridge or buffer between them and the public. The public needs his protection. These animals aren’t even kept in cages!

Clowns tend to fall into hierarchical relationships, according to their intellectual intelligence. Or to be blunt, some are dumber than others. There is always a pecking order. Relationships are asymmetrical, undemocratic. The gags always flow downstream in one direction. A lower status clown never succeeds in playing a trick on a higher status clown. But the lower status clowns compensate by having a sympathetic or poetic relationship to the audience. They have emotional and spiritual intelligence. Any relationship between two clowns develops out of recognition of their pecking order.

Clowns do not succeed in behaving like adults, although sometimes they think they can. Some clowns, such as the White Clown, are better able to function within the “normal” adult universe, or at least better able to assume some of the postures associated with it. To succeed in being orderly and sensible is not part of a clown’s true nature, any more than it is that of a toddler. If a White Clown tries to be sensible and mature, the result is exaggerated, grotesque and oppressive. If an Auguste has the hubris to try to be adult, the result is incompetence and disastrous failure. And of course very funny. If the Eccentric tries to be sensible and orderly, the result is mysterious and obsessive.

And some quotations from Lecoq:

“This discovery of how personal weakness can be transformed into dramatic strength was the key to my elaboration of a personal approach to clowning, involving a search for ‘one’s own clown’, which became a fundamental principle of the training.”

“The less defensive he is, the less he tries to play a character, and the more he allows himself to be surprised by his own weaknesses, the more forcefully his clown will appear.”

“The clown, who is ultra-sensitive to others, reacts to everything that happens to him and varies between a sympathetic smile and an expression of sadness. In this first contact with an audience, the teacher must watch whether the actor precedes his intentions. He should always be in a state of reaction and surprise, without letting his performance be deliberately led (we say “telephoned”), reacting before he has any motive for doing so.”

“Above all he must avoid playing a role, but give free rein, in the most psychological manner, to the innocence inside him which comes out when he is a flop or bungles his presentation.”